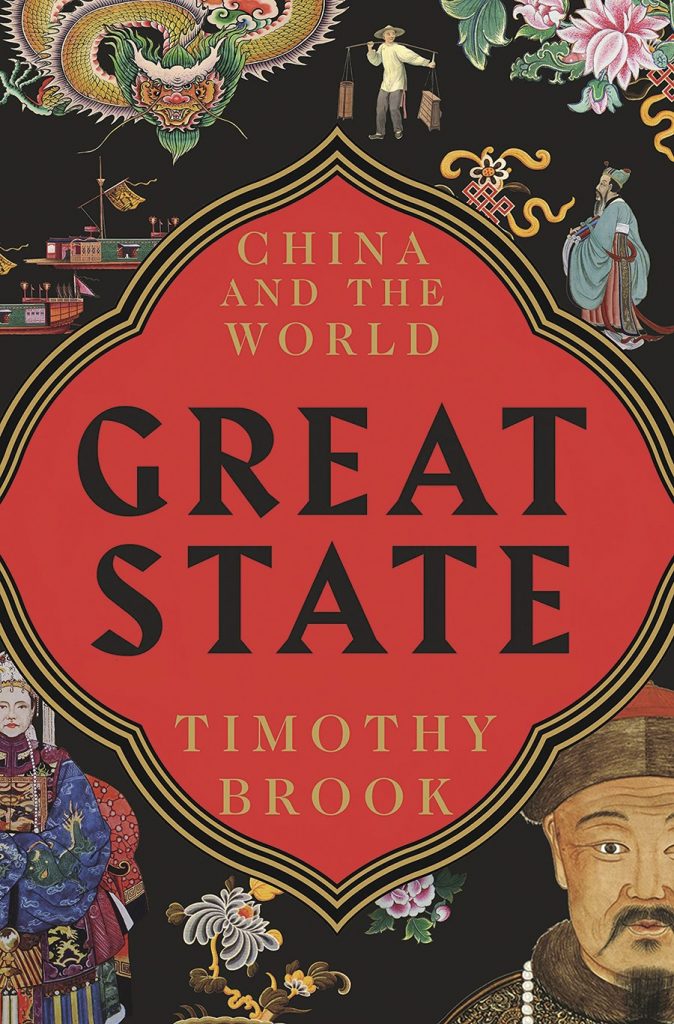 Over at the Washington Examiner I have a book review out of Timothy Brook’s The Great State: China and the World. Brook is a well regarded historian whose past work has focused on both the Ming Dynasty and on early 20th century China. This book is a popular history that narrates episodes from the Yuan Dynasty to the current moment. As I explain in the review:

In Great State: China and the World, Brook tells 13 stories from the last 700 years of China’s past, each of them peeking into the Chinese people’s relations with the outside world. As a convincing argument that China’s diplomacy has been guided by a consistent framework over the centuries, Great State leaves much wanting. But as a narrative introduction to key episodes in China’s foreign relations that is accessible and even riveting, this book is a smashing success.

Each chapter of Great State follows a similar framing. Placed at the front of each is a plate image (a reproduction of a painting, a map, or a photograph) that is connected in some way to an episode in the history of China’s relations with the outer world. Brook proceeds to describe the intricacies of these images in lavish detail, showing what they reveal about the minds and perceptions of their creators. Having set the scene and transported his readers to the past, he then shifts his focus from images to individuals. Most chapters of Great State focus on two people, one Chinese and one a foreigner, connected to one another by a strange flow of historical events. Sometimes, these will be high-born individuals at the center of great affairs of state (e.g., a dalai lama and the Qing prince sent to negotiate with him); other times, the relationship Brook describes will be more mundane and private (e.g., a Catholic missionary in Nanjing and his convert).

Unlike many academic historians, Brook is a terrific storyteller. But he does more than just stitch his sources together into a compelling story — he also uses his narrative skills to show how historians sift through conflicting and confusing sources to craft a coherent understanding of the past. Many of Brook’s chapters are presented as mystery tales whose full details must be uncovered and pieced together by the historian and his readers. Some of them, such as Brook’s investigation into whether the 13th-century Black Death ever came to China, are compulsively readable. Great State is one of those rare books that will both resonate with a general readership and whose chapters may be usefully assigned to undergraduates to teach them the “historian’s craft.” [1]

Although I enjoyed the Black Death chapter of the Great State, the chapters on various Ming dynasty era episodes were the clear stand outs. Each of these chapters is a stand alone narrative that can be read without reference to the others; on the strength of the writing alone, I can safely recommend this book without reservations to just about any American.

Which is not to say I fully agree with Brook’s interpretations. I describe some of my disagreement with Brook in my review, but I want to make a few additional points here that I did not have space for in that column.

The Great State does not really have a thesis so much as it has themes. One of the themes is found in the book’s title, this notion of the “Great State.” I will let Brook explain what he means when he uses the term:

Before the 1270s China was a dynastic state in which one family monopolized power at the center because, so the theory went, Heaven had given that family an exclusive mandate to rule. What changed with the coming of the Mongols was the deeper conviction that this mandate entailed the right to extend the authority of that one family out across the world, incorporating all existing polities and rulers into a system in which military power was paramount. This was the Great State, and this is what China became.

…The sovereign of the Great State was endowed with an authority that potentially universal: those within must submit to his authority, those without must defer to it. The concept matters because it was a basic fact for those who owed the Great State allegiance as well as for those entering from zones beyond its reach. It supplied the symbolic architecture of the spaces in which Chinese and non-Chinese interacted. It colored the terms within which they imagined they were. It perfumed the moral air they breathed. Part of knowing you were Chinese was knowing you stood under the canopy of the Great State.[2]

Brook’s big idea then is that the Mongol empire inaugurated a new, more universalistic understanding of political authority in East Asia. The rulers of China who came after the Mongols adopted this understanding as their own and claimed a mandate of the Mongol sort ever after.

I am not sure this is actually true. It is quite obviously true for Zhu Yuanzhang (founder of the Ming) and the Ming rulers who immediately followed him. But as my review points out, claims of universal authority—much less actions intended to enforce it—are less common as the dynasty wears on, and the stories Brook himself chooses to tell reinforce, not subvert, the traditional story that the Ming dynasty spent most of its existence looking inward.

But my larger problem with this idea is that I am not sure how Mongol it really is.  Brook asserts that this political philosophy had no precedent in the pre-Mongol era, but as none of the episodes he narrates come those earlier eras, the distinction he wishes to draw between late and early Chinese history remains fuzzy. The appellation “great” was being used to describe dynasties before the Yuan; more importantly, claims that Chinese rulers had “the right to extend the authority of [their] family out across the world” are not that hard to find earlier in Chinese history. A millennia before the Mongols conquered China we find a Confucian making the following argument for war with the Xiongnu confederation on China’s borders, who at that time had a fairly equal (as opposed to ritually subservient) relationship with the Han:

“the situation of the empire [is currently like] a person hanging upside down… To command the barbarians is a power vested in the Emperor at the top, and to present tribute to the Son of Heaven is a ritual to be performed by vassals at the bottom. Now the feet are at the top and the head at the bottom.” [3]

When the Han actually did begin their conquest of Xiongnu territories a few decades later, Wudi, the emperor who led this terrific expansion of Han power, justified it in the following terms:

I have heard that in ancient times under [mythical emperors Yao and Shun] marks were drawn on clothing [to signify the punishment of criminals] and the people did not disobey; nowhere was there anyone who did go about his business…Their virtue spread even to the birds and the beasts; their example was known beyond the four seas. Beyond the sea, the Sushen, the Qusao of the North, and the Diqiang came to surrender… How can I be compared to Yao and Shun, how can I equal these kings?” [4]

Thus all the way back in the 130s BC Chinese dynasts were expressing their political ideals and mandates in the terms of all people everywhere and the surrender of barbarians from all corners of the earth. Han Wudi did not inherit the Mongol “great state” but it is hard to look at what happened during his reign and conclude that his state did not operate on a similar model.

[3] The Confucian in question was Jia Yi, the quotation is taken from Yu Ying-shih, Trade and Expansion in Han China (Berkley: University of California Press, 1969) p. 11.

Great review! Thanks for sharing!

Your point about the "Great State" notion not really being "Mongol" is on point; last year I happened to be at a talk where Brook was asked how he explained the use of the term 大宋 during that dynasty's time, and his answer basically boiled down to "I've never researched pre-Yuan China." The basic idea that "Great State"/大國 1. was introduced to China by Kublai, and 2. represented a different way of thinking about foreign relations than what had existed before simply doesn't make sense to me. Even in the Zuozhuan the virtue of the Son of Heaven was often described in the terms of getting the voluntary submission of barbarians in all directions. Brook is indeed a great storyteller, but I wish he could have kept this book as a collection of loosely related stories without making claims about broader historical developments.